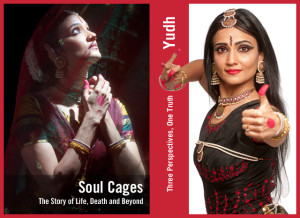 Performing for the first time in the Twin Cities

The Soul Cages captures the cycles of life and death as a journey, rather than an end in itself. At its core, the ‘Soul Cages’ brings to life, a deeply thought provoking philosophy by examining it through the eyes of mythological characters and ordinary people through the disarming simplicity of a child. ‘Soul Cages’ redefines not just one’s perception of the cycles of life and death, but also redefines the boundaries that tradition has placed on Bharathanatyam.

This is the story of a battle of equals. The strategists at this war are equals in their abilities. Their armies equally matched, and outcomes certain only in uncertainty. In such a universe, when perspectives are lost, a thousand doubts enhance human frailty. YUDH tries to explain that perspective we have lost sight of. There are some wars we fight whether or not we believe in them. This is what we were created for.

Choreography and Performance by Savitha Sastry

Music by renowned composer Rajkumar Bharati
ABOUT THE ARTIST
Savitha is a leading exponent of Bharathanatyam, the classical dance form of Southern India that has its cultural roots in ancient history. Trained by stalwarts Sri Mahalingam Pillai, Sri V.P. and Smt. Shanta Dhananjayan, and Sri Adyar K. Lakshman, she is deeply grounded in the Bharathanatyam tradition. Savitha’s mission is to bring this art form to a wider audience without losing its aesthetic and cultural integrity.

As a solo dancer, Savitha is a pioneer in using the medium of Bharathanatyam to create new choreographies utilizing narratives that allow the viewer to be connected with the presentation every step of the way. These performances have reached out to new and diverse audiences around the globe, while the erudite have appreciated her initiative in using an age old tradition in a novel and compelling manner. In the press, she is heralded as a classicist who is not afraid to break tradition, while stretching the boundaries of Bharathanatyam with her innovative use of the medium.

Savitha is an empanelled artist with the Indian Council for Cultural Relations, and is an ‘A’ grade Doordharshan (television) artist. She has performed at highly prominent venues around the world, and was featured in the 2011 BBC documentary ‘Sex, Death, and the Gods’, about the history of temple dancers in South India.

For more information about the artist, please visit http://www.savithasastry.com

FROM THE CRITICS:
Her performances are straight-from-the-heart expressions…

Her movements on stage are fluid poetry!

One of a kind in the arena of dance, music, and theatre. ..

Redefining the dance form and its philosophy…

At the forefront of keeping traditional Indian dance forms alive…

In Savitha’s presentation, the uninitiated novice will but madly fall in love with the art!

… Electrifying response from the audience…