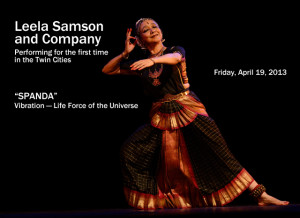 SPANDA
‘Spanda’ – a vibration – is symbolic of the enduring and perpetual energy that is the life force of the universe. It incorporates the philosophical concept of ‘Prithvi’ – Mother Earth – as the center and source of energy in the universe, and equates it with the ‘nabham’ – the womb – as the origin of energy in the human body. It is a journey inwards seeking the essential ‘center’, the origin of movement and its source of strength.

Spanda explores rediscovery of the basic movements of Bharatanatyam and the need for a reinterpretation of its traditional vocabulary.  Spanda seeks to establish a more relevant dialogue between dance, music and stagecraft.
ABOUT THE CHOREOGRAPHER and LEAD ARTIST
Leela Samson is among India’s most dynamic and technically brilliant dancers, an outstanding representative of Kalakshetra, the famed institute for the classical arts founded by the late Rukmini Devi Arundale on the Chennai ocean front. Her seemingly understated delineation conceals a powerful and inspired inner source, which gradually unfolds before the viewer. She is a virtuoso performer and a sensitive interpreter of the nuances of Bharatanatyam. Distinguished as both a soloist and a choreographer, her personal style is unostentatious, serene and characterized by an impeccable technique that blends geometrical precision with vibrancy and an unfettered ease.

Two documentary films, “Sanchari” and “The Flowering Tree” have been made on her works. Among the many honors conferred on her, Leela Samson was awarded the prestigious Padmashri (1990) by the President of India in recognition of her outstanding contribution to the art of Bharatanatyam as well as the Sangeet Natak Akademi Award (1999-2000) instituted by the apex cultural body of the Government of India.

In addition to achievements as a performing artist, she served her alma mater Kalakshetra as its Director from 2005-2012, and is the chairwoman of India’s Sangeet Natak Akademi (2010-present) and Central Board of Film Certification (2011-present)

FROM THE CRITICS:
Samson’s choreography is clean, crisp and complex. Nary a gesture, glance or breath is unintentional or thrown away. Dancers contain their energy like pressure cookers and work in perfect synchrony.

Here is someone who has understood that a sense of aesthetics is the most important ingredient for an artiste. There was this sense of style in every movement and every nuance, not overtly visible, but subtly so.