Suchitra Sairam is a highly committed Bharatanatyam artist with 30 years in the field, and received foundational training in the Kalakshetra style from Smt. Padmini Chari. Suchitra has continued advanced training in Bharatanatyam under legendary artists Sri V.P. and Smt. Shanta Dhananjayan, and Sri M.V. Narasimhachari and Smt. M. Vasanthalakshmi for over 25 years. All of these artists continue to be great guides and inspirations to her as an artist, teacher, and arts presenter.

Suchitra’s artistic work has been received with appreciation, and is noted for its adherence to her gurus’ exacting standards and depth in both abstract and expressional dance. Suchitra’s performances as a soloist, a lead dancer in several of Nritya’s productions, and as a guest artist in productions by Monica Cooley (Kala Nivedanam, Nashville, TN) have been received with appreciation. Her solo performances over her career have supported fundraising activities for a variety of worthy causes in several cities in the US, and she has participated in local cultural outreach through Geetmala TV on TPT-MN, and the St. Paul Art Crawl. Suchitra is a skilled nattuvangam (vocal percussion and hand cymbals) artist, accompanying soloists and dance companies.

She has the good fortune of teaching a small group of very committed students. Suchitra has presented six of her students in their formal solo debut, or Arangetram. Her students have earned awards in Twin Cities Bharatanatyam competitions since 2011 in solo and group categories, and won 1st place in the prestigious 2014 Cleveland Thyagaraja Aradhana solo Bharatanatyam competition (Sub-Junior category.)

As a choreographer, Suchitra staged her first full-length work, Love Lyrics, in 2004 at the Minnesota Fringe Festival, which included the debut of several original group and solo choreographies. She has also been a guest choreographer for the Main Street School of Performing Arts Dance Company, creating and teaching an original work for their Spring 2015 Concert. Suchitra continues her choreographic explorations, with a wide repertoire of solo and ensemble Bharatanatyam works. Suchitra and Kala Vandanam premiered their newest original full-length ensemble production “Ritu – The Seasons” in January 2017, with the support of a 2015 Knight Arts Challenge grant from the The John S. and James L. Knight Foundation.

In addition to her Knight Arts Challenge award, Suchitra has also been awarded a 2016 “Next Step” grant from the McKnight Foundation and 2017 and 2018 “Folk and Traditional Arts” grants from the Minnesota State Arts Board. She was also named a 2016 State and Regional Ambassador for IndianRaga.

Suchitra holds a bachelor’s degree in Chemical Engineering from MIT, and an MBA from the University of Texas-Dallas. After an extensive career in several industries, she co-founded a start-up toy company, Enlivenze LLC, in 2012. In addition to business interests and passion for the arts, she has volunteered her time support women’s professional development and science and math education for girls. 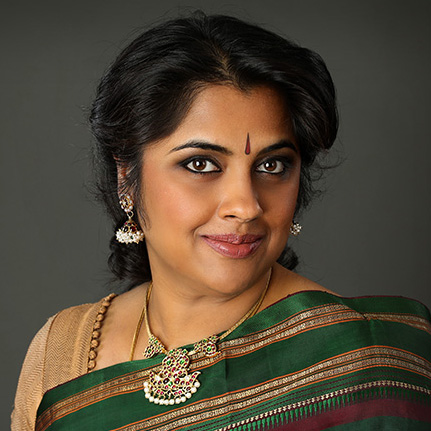 “Creativity is allowing yourself to make mistakes. Art is knowing which ones to keep.”
– Scott Adams

“Balancing Bharatanatyam as a treasured part of the Indian community, as well as an art form  that can be enjoyed by anyone, is a difficult needle to thread.”