This is the fourth (bonus) lesson that I learned from Suchi akka- how to accept or at least tolerate someone in their whole self, the good times and the mistakes.

There are many other ways in which dance has consciously and subconsciously shaped who I am, and even though I haven’t actively practiced in some time, I often find myself coming back to this formative experience. I owe all of this to my guru, mentor, and sister, Suchi akka. 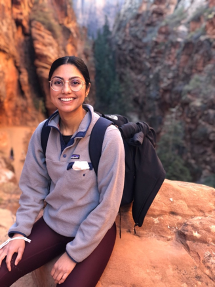 Apoorva Kanneganti is one of the first students at Kala Vandanam. She began her training under Suchitra Sairam in 2003 and learned actively for over 13 years, including presenting her Arangetram in 2011. She is a management consultant by profession and an adventurer by passion. Apoorva enjoys spending time outdoors with activities like running, hiking, and scuba diving, all of which are much more accessible since her move to California. A Midwesterner at heart, she grew up in Minnesota, where she later graduated with a BSB from the University of Minnesota and received an MBA from the University of Michigan after a short stint in Chicago.

#natyamnaatak – Who do ya think you’re fooling? APRIL FOOLS!
Scroll to top